Man walks away from lightning strike! TWICE! -- NOT!

Watch this video:
Pretty convincing huh?
Now look at these screen captures of the two strikes. They are in order.

1st strike problems:
The man is near the front of the van and yet the shadow of the van cast by the bolt goes many feet in front of the van-all of the way to the next van. For a light source to cast a long shadow like that it must be behind the van. Clearly not the bolt.
Also, look at the trees just beyond the second van on the left, they are barely illuminated at all, in relation to the others. Wouldn't they also be brightly lit if a bolt of lightning struck so closely?
Click on image for larger version. 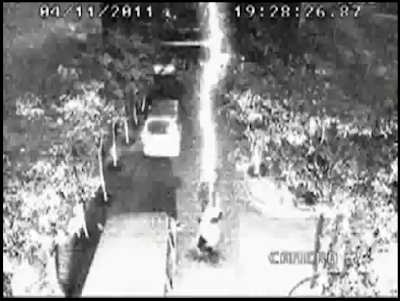 2nd strike problems:
The illumination cast by the second strike is almost identical to the first, despite it occurring in a different location. How's that happen? The first van is casting a shadow toward the light source; that simply can't happen. The trees closest to the camera on the right side would have more shadow because of the location of the light source, and the trees in front of and on the left of the second van would certainly be lit up by the second bolt.
Click on image for larger version. 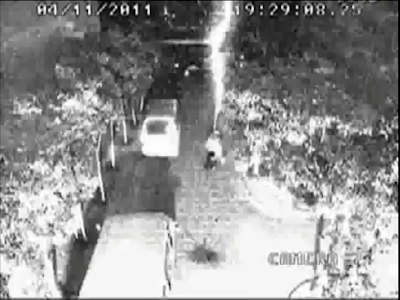