My knock-off of Picasso's The Dream 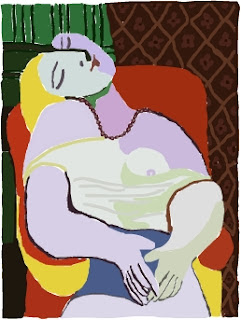 Woke up reluctantly at 4am CST to welcome the debris tail of comet 109P/Swift-Tuttle. I popped a beer, and sat in the backyard for about an hour. It is difficult to look up and drink at the same time, but I managed.
I rate meteors by a count of existence. If I can count to one and it's gone, then it's a 'one count'. I saw several 'one count', a few 'two count', and three 'three count' meteors. The threes were not very colorful. I remember last year that the Leonids in November are usually colorful; greens mostly. I know that color relates to the chemical composition of the debris.
The threes I saw were from North to South. A little light started creeping over the East around 5am, and the beer was empty, and the cats were all outside with me wondering why I was outside in the dark; so I decided to call it done. Besides, I had to get back up at 630am for work.
In the past, I and a group of friends have driven out into the country and parked on a dirt road to drink hot coffee and whiskey or beer (depending on the time of year) to watch showers where we would count several per minute. The disappointingly small amount I saw this year was either due to the light pollution of the city or the lack of the double vision of times past...
I now understand nostalgia; it's always better than the present.

Read about the shower from the people who know best: The American Meteor Society
Also check out their calendar for 2007
Posted by Fatuous O. Hades at 9:22 AM No comments:

Ad nauseam through my life I have heard the 'Weather Talkers' say,
"It's not the heat; it's the humidity that kills you."
No Dammit!

Go sit in a tub of water.
That's 100% humidity.
Now, set a fire under the tub until it boils off your skin.
Was it the humidity or the heat that killed you?