Well, here we are again, it's random, severed foot time. Place your bets! I've got ten bucks on left foot and male.
Everyone get your tarps and hacksaws.
I'll admit for the first few feet, I thought, 'No big deal. Feet fall off all the time; the world is an imperfect place.'
(See Breakfast Club quote)

But now the count is up to seven (for Canada and only one for the US - sounds like the winter Olympics gold medal count). Normally, some consider that a lucky number, but in this case...nah.

Dang, it's a right foot. Double or nothing on it being male, that hasn't been determined yet.

For a catalog of the previous six visit the Wikipeda article Discoveries of human feet on British Columbia beaches, 2007–2008 (yes, can you believe that there is a Wikipeda article on the number of severed feet that wash up on Canada's shores - tis a weird, weird world we have here)

And if you read the Wikipeda article, and I did, you'll see that four of the eight feet match two people, one man and one woman who was wearing New Balance running shoes. Also, there was a hoax foot - not funny.

The CBC is maintaining an interactive map of the locations of the found feet. They have pictures of some of the shoes. "What!" you say, "Yes, they do!" I say. Go look. Of course, they took the feet out, you sicko.

In addition to the source that brought this to my attention (credited below) I did some independent Google searching for more facts. Normally, no big deal but when I did there were some 'Sponsored Links' shown that I hope were auto-generated, because if someone planned them, EWWW! Gross! This is not Photoshopped; this is a genuine screen capture! 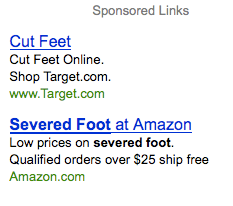 "Cut Feet Online" and "Low prices on severed foot." Someone needs to review their keyword auto-gen system. Please! You do a Google News search for "severed foot" and see what you get; I'd be interested to see yours.

Oh and to give total source credit, because a good English major hates plagierism and always quotes the sources; I got the articles from a tweet by Rachel Maddow. A news woman interested in severed feet - swoon...
Posted by Fatuous O. Hades at 7:55 PM No comments:

Dolphin or Whale and Butterflies

Okay, they're whales. Really, they don't look anything like dolphins. Anything.
"Hey, I calls 'em like I sees 'em! I'm a whale biologist."
And if you don't get that quote, you should watch more Futurama! 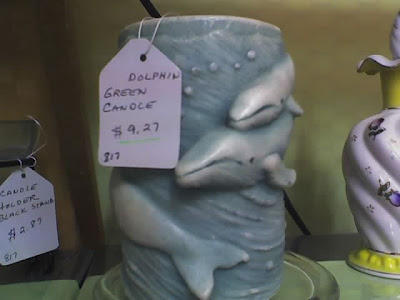 Butterfly Ball. Do they do this in nature? 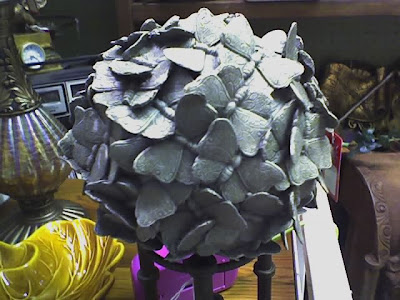 Okay,... Ball Cluster. That's all I'm saying. Ball Cluster. Do people really buy ball clusters of butterflies? What a waste of resin. We could have used a few more thousand resin frogs, or birds, or clowns, or little girls with umbrellas, or wolves, or Beethovens. 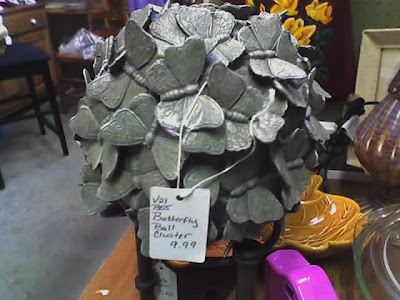 Posted by Fatuous O. Hades at 4:05 PM No comments:

Tequila goes way back - we all know that it's agave squeezings that make that mythical passout booze tequila. It looks like the native cultures of the US southwest raised agave as a food crop.

This one deserves a post unto itself. I did not stage this; I innocently walked around the corner and there it was. Either someone has the same sick sense of humor that I do, other booth owner thought that might be a good way to keep dust out of the doll head's hair.

Typically a cloche (bell jar), covers garden plants planted in early spring from cold weather and surprise frosts. The first use of bell jars (in the West) is attributed to the French; ironically enough they are also well-known as doll makers.

Also the title of Sylvia Plath's only novel, the bell jar is the metaphor she uses to describe her mental illness. She is trapped in a bell jar and can't breath. Ironically, depriving herself of breathable air is how she finally committed suicide. She sealed up the kitchen with wet towels under the doors and gassed herself in the open oven. 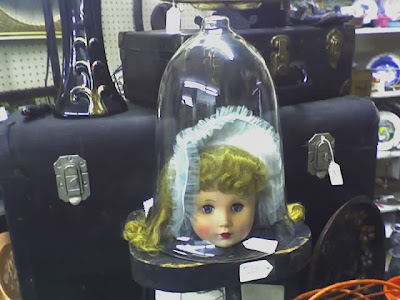 Posted by Fatuous O. Hades at 6:29 PM No comments:

With the 4th of July quickly approaching, I felt the need to post these photos. These are the feeling that are supposed to be encouraged by our (the USA's) desire and pleasure at what some black powder and fire can produce. I'm only making a little fun; I seriously love fireworks. And you don't need a lot of money to create awesome havoc: the basic firecracker, bottle rockets, and Roman candles are enough to make an amazing catastrophe.
Honestly, who hasn't blown their fingers numb or set themselves on fire at least once as a kid; and if they're like me continue to do so.
Light my punk, and let's go!

Ahh, the Ultimate Encore. Sounds good, doesn't it? Just when you thought the show was done, you don't just get the encore you've been waiting for, but you get Freebird and Stairway to Heaven and a BJ all rolled into the Ultimate Encore! Mmmm... 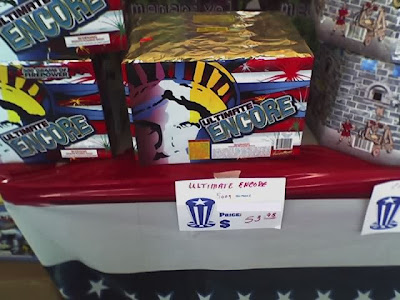 That's either a BFG or a boombox on her shoulder, either way...Fire Goddess Walk with Me! 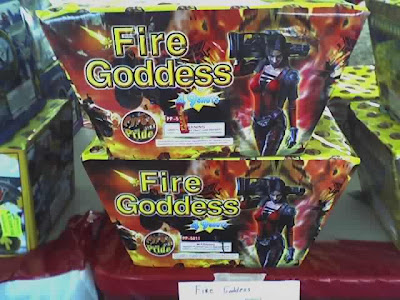 This one, well...someone has be watching the old pirate movies, you know, Errol Flynn and crap like that. That's no Keith Richards shitty-pig drunk on rum with six eyes kind of pirate. Hide your booty and your bum. 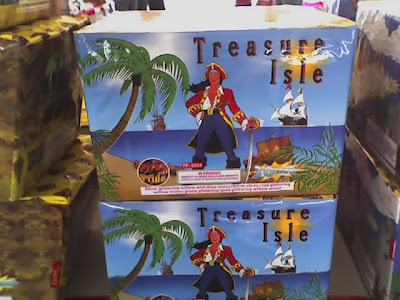 Did vikings have fireworks? Who cares! There is something about a buxom blond with a horned helmet holding a sword with dripping blood that gets your pressure up and makes your pants tight. Super-buxom means that each breast is the size of her head - get a ruler and measure them; I dare you. I haven't even mentioned that she's got 24 shots; I don't even know what that means out of a woman with a sword, but it's still hot! I almost bought this one. 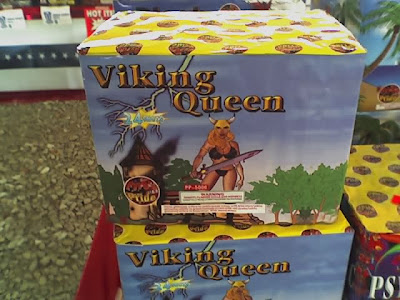 Small Festival Balls. Not really a lot to say here, other than, WARNING Shoots Flaming Balls! Okay, it was a ball joke, but really, you were thinking it; I just typed it. 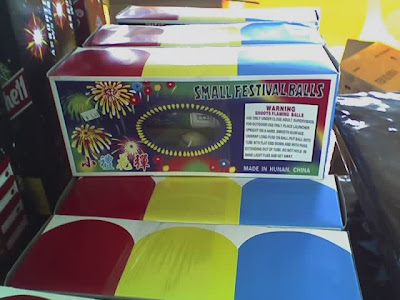 Power and Pride. What else is there to the holiday? The Statue of Liberty on one side, a bald eagle on the other, with the old stars and stripes behind - nothing is more American. Did you happen to notice the "String o' Pearls" sitting next to the box? 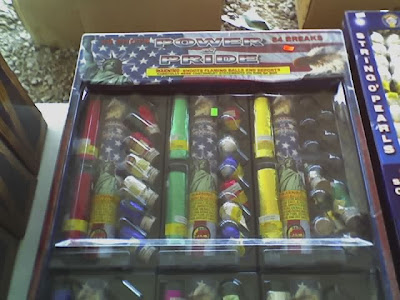 This is America. We blow shit up for fun while drinking beer. Don't mess with us, we're crazy. 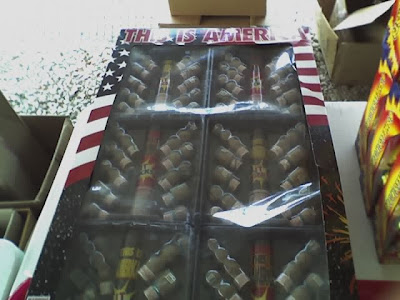 Posted by Fatuous O. Hades at 8:01 PM No comments:

"This demo -- from Pattie Maes' lab at MIT, spearheaded by Pranav Mistry -- was the buzz of TED. It's a wearable device with a projector that paves the way for profound interaction with our environment." -TED

The URL http://www.ted.com/index.php/talks/pattie_maes_demos_the_sixth_sense.html
Posted by Fatuous O. Hades at 10:23 AM No comments:

Here are some more great (blech) finds. If you didn't believe that fact is worse than fiction take a gander at these. Happy misshapen head clown - he's not really happy, it's just that he likes kids - a little too much... 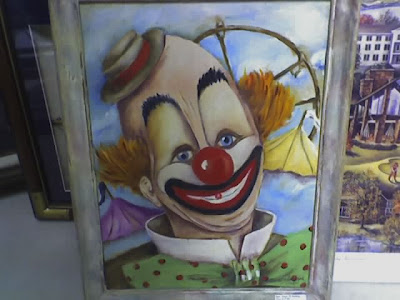 and black velvet clown not as kitschy as Elvis or dogs playing poker and somewhat evil looking like Sideshow Bob (from the Simpsons). I must say the execution of the painting was surprising good, but the subject matter is straight from a sub-par cranked-out (not the drug - something quickly done to capitalize on your fame to make money before your fame dies and not concentrating on the originality or the quality of the story line), Stephen King novel. Ta-da... 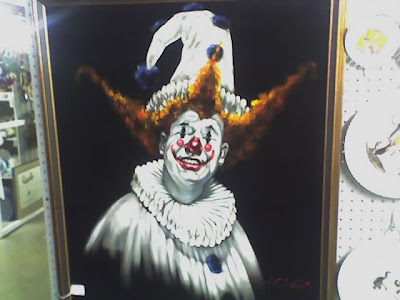 Posted by Fatuous O. Hades at 6:29 PM No comments:

Micheal Shermer from Ted Talks. Enjoy. The last bit about the auditory patterns is great!

Posted by Fatuous O. Hades at 2:19 PM No comments:

More pic of things that will never sell. A different day, a different Flea market... more weird stuff. A copper can, with mirrors and a cow skull hot glued on it. And I don't even know what that blue crap is... 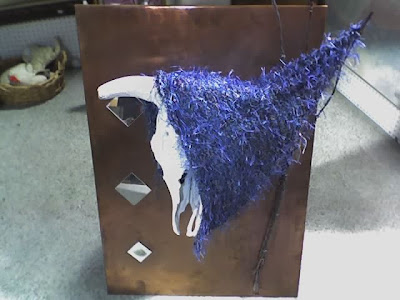 Does this one remind you of a song? Perhaps, a song by the untalented girlfriend of a dead talented grung rock star? Maybe a song by a drug thinned, bleached blond that only became famous after screwing the aforementioned grung rock star? Not coming to you? I bet she doesn't smell like teen spirit... 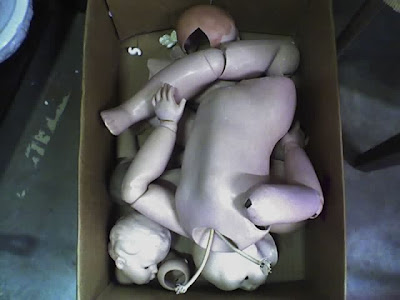