This is an excerpt from "The Joy of Stats" on BBC channel Four
Hans Rosling takes 200 Countries through 200 Years in 4 Minutes by animating data points - neat!
He might be the world's most optimistic person!

At the end he shows that he can break out individual provinces of China. I'd like to see him take us through individual countries and break it down into wealth vs. percentage of population vs. lifespan. I know he was using averages from each country, but still and all. Does that mean that one rich 80yr-old balances against four poor 20yr-olds? I didn't do very well in stats class...

Posted by Fatuous O. Hades at 3:08 PM No comments:

Denis Dutton proposes some compelling ideas about how and why we define beauty as we (modern Humans) do. He's looking for a definition that explains the frequently universal appreciation of certain forms of beauty that trancend cultures, countries, and time. He attempts to do so using a Darwinian approach.

"Beauty is an adaptive effect which we extend and intensify in the creation and enjoyment of works of art and entertainment." - Dutton

Most of Dutton's Darwinian Beauty argument stems from the sexual selection side. He mentions the proof of reproductive fitness argument for the reason Peacocks have such large and colorful rear-end plumage. I think everyone can buy that, in the bird world, as you know, the male must attract and woo the female. There are several ways of accomplishing this, building ornate nests, complicated dances, collecting blue items, and of course singing, but the most common is dazzling the ladies with colorful plumage.
The drawback is that this makes the male much more obvious to predators and lowers his overall chances for reproducing - and raises his chances of being a pretty garnish for lunch.
"Waiter, there are feathers in my soup!"

I appreciate his goal - he wants to get near a definition of the human experience of beauty. Why one thing is and the other isn't, even though he doesn't really address what isn't. He also is looking at the question from a place that is beyond Plato and Aristotle. That is refreshing and a little uneasy for me - I am most comfortable with the old Greek mindset. But philosophical comfort is boring and too close to religion, so watch the embedded video and below it let's consider a couple of points from the lecture.


Watch the video on the TED.com site

One of his more provocative statements, "The experience of beauty is one of  the ways that evolution has of arousing and sustaining interest or fascination, even obsession in order to encourage us toward making the most adapted decision for survival and reproduction." He then sums up this statement a bit more succently by saying, "Beauty is Nature's way of acting at a distance." (I'm assuming the capital "N" there.)

I'm not comfortable with the idea that evolution is a driving force unto itself. I prefer to think of it as a survival  tool of DNA, chromosomes, and genes. Evolution is a way for our reproduction to continually adapt to the changing environment. There is no ultimate, perfect creature that evolution is driving us forward to; there is no ideal form at the end of the evolutionary tunnel. Living things change from generation to generation sometimes randomly (usually doesn't work out), but more often in a reactionary, adaptive way to the environment in which they live. The environment changes, living things change in order to continue to live in the new environment; it's really kinda simple.
Life begins and ends with reproduction, right? It's the reason for life and the result of life. I'm willing to examine misstatements about the motives of evolution further, but not in this post.

On the idea of representative beauty. Dutton brings up the idea that there is a universal beauty to a certain style of landscape (at 6:57min into video) because it is the vista that all of our ancient ancestors saw when they were first becoming Humans in Africa. It is a open grassy area, with hills, a few trees, water, and a path that goes into the distance.

I think that the perfect landscape is a result of artistic sensibilities related to interesting focal points and subject matter. Artists seem to have an innate sense of beauty, but consider that they study their craft closely (well, if they're any good they do). Imagine that you want to paint a landscape. You could start with a straight line, but hills are more interesting. Then a few trees and maybe a water feature. They are just adding in as many different elements as they can, so long as they make sense. Some mountains in the distance and maybe a path that let the view place themselves in the scene. An ancient collective memory of our first 'happy place' seems difficult to believe. Humans have lived in every environmental situation on the planet for thousands of years - desert, savanna, forest, mountains. Maybe it's because the scene contains at least one element from most environments, and that is the familiar thing that everyone reacts to.

Beauty has a close relation to visually perceived symmetry. Consider the human face; we think we like a certain color of hair or eyes, or a particularly shaped nose, but what we are really reacting to is the symmetry of the face. The closer the face is to perfect vertical symmetry [Rhodes, G] and the one-third ratio rule (of eyebrows to chin -[Reynolds, R] I will try to find a better reference for this) the more beautiful it is perceived to be. This could be related to our assessment of reproductive fitness, as long as health is related to symmetry.

Back to the idea of reproductive fitness and beauty. Dutton mentions (at 9:40min into the video) finely carved (actually chipped using the break and flake method) leaf-shaped Acheulean handaxes (an image of one) that were produced millions of years ago (some have been dated as old as 3 millions years ago). He thinks that some (thousands) were only made as examples - as objects of art. The quality of these handaxes were to show the hunting prowess of the creator and therefore demonstrating a personal fitness and a superior ability to provide food and care.
He gives four reasons:
I'm not convinced that these reasons denote that these axe heads were purely objet d'art. If we are literally considering objects 2.5million years old,
My point is that there are explanations for his points that don't necessarily back up his theory. So maybe we should just call it a hypothesis.

References:
Reynolds, R., How to Sketch a Human Face
Rhodes, G., Facial symmetry and the perception of beauty
Posted by Fatuous O. Hades at 12:55 PM No comments:

This is not new, but I like it, and I thought I'd show it off.
So here's a slideshow of my public Flickr images.
You can grab the code by going to your photostream and clicking on the Slideshow link just under the search box. Once in your slideshow, click on on Share in the top right and grab the code. Easy-peasy.

Would you like to see this in a window by itself? Click on Slideshow in New Window then why don't you?
Posted by Fatuous O. Hades at 4:56 PM No comments:

I can make Blackboard do this...
This is a module page with custom backgrounds and a transparent menu - 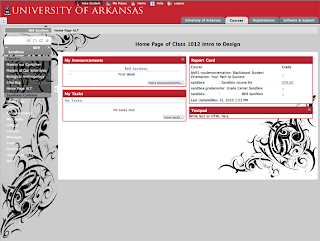 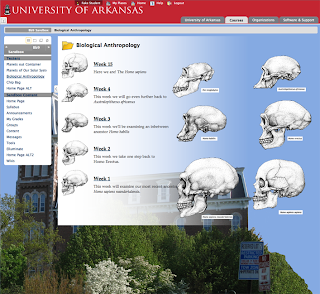 This is an item where the words on the bag, "Home, Poetry, Blog, About Me, Fiction, Art 4 Sale, and Free Wallpapers" are all hyperlinks to other sites and pages, and the page has a custom background color. 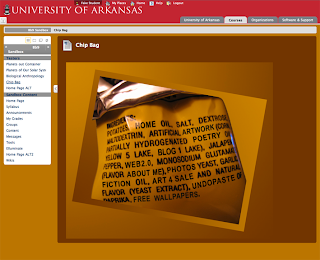 Suck on that Blackboard.
Posted by Fatuous O. Hades at 1:47 PM 2 comments: